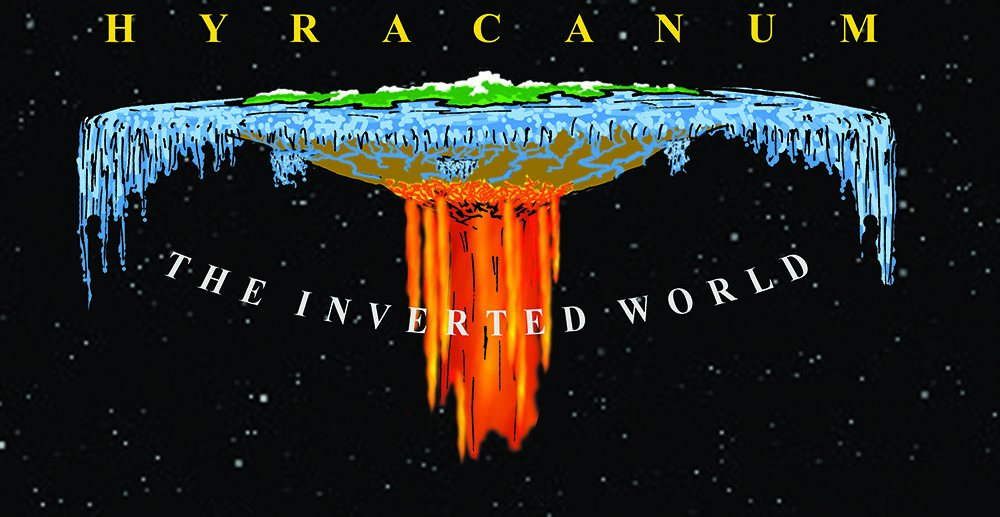 The Creator Gods of Hyracanum are the twelve constellations that look down upon their world, intended as an arena in which they could test out their philosophical differences, using the Elemental Planes for raw material.

First, a bubble of Air was formed.  At its center, they opened a vast portal to the Elemental Plane of Fire and encased it like a heart within a disc-shaped mantle of Earth, to warm this new world.

At the center of the disc’s topside, a vast column of rock arose 400 miles tall and as many across whose flat top is a vast portal to the Elemental Plane of Water, forever overflowing into the world and hydrating its rivers, lakes and ocean.

Seven moons of differing shape and constitution were set in orbit around the disc at an angle so as to avoid collision with the path of the daily sun, a titanic fireball launched from the Sun Gun in the eastern firmament each dawn.

After populating this new world with all manner of plants and animals that we would consider “natural”, the gods decided to rest before moving on to create avatars of themselves.

While they rested, the latent magic left over from creation manifested in the form of Dragons, the first intelligent beings and totally disobedient to the gods.

Watching these beings of pure magic and nature manifest and spread across their world, the gods created the Elemental Giants (Fire, Stone, Cloud and Storm) in their image to try and tame them.

In response, the Dragons created beings after their own image and so Dragonborn and Kobolds came to life in a master-servant relationship to thwart the Giants and spread across the land.

It is said that the Yuan-Ti arose at this time, either as a forgotten creation of the dragons or as an experiment by the first Dragonborn sorcerers. The snake people claim they came into being at the same time as Dragons and are thus the first civilizing race and co-equal to the wyrms. This arrogant supremacist perspective of history justifies their desire to enslave all civilizations.

The Giants proved to be too-perfect replications of the Gods as their willfulness put them beyond the control of their creators. They still regarded dragon-kind as their enemy and began dabbling in creation with several beings made in their image.

Frost Giants and Hill Giants were their first experiments, followed by the disastrous attempt that gave rise to Ogres. The Giants finally struck gold (so to speak) with the creation of Dwarves, intended as miniaturized versions of themselves to send into the small spaces beneath the earth to find precious metals.

Meanwhile, through the overlap between the forests and jungles of Hyracanum with Elfland, faerie-folk began to seep into the world. Elves, Gnomes and Goblins are non-indigenous races who sometimes crossover from their world to ours.

The Gods, seeing this escalation as highly disruptive, decided to create another race of beings in their own image, a race which could be more easily punished if they turned out to be as willful as the giants. And so, Humans came to be.

At about this time, Dwarves turned to a permanently underground existence except for one strain which preferred sunshine and socializing with the new humans to toiling stoically in the dark. Thus, Halflings became an offshoot of Dwarf lineage.

As long as there has been sorcery and wizardry, there have been monsters created by magical means. Many creatures owe their existence to the time before Humans and many more since.

Orcs did not exist before humans because they are created from them through a process involving torture and black magic. All Orcs are male, there are no females or young, but the urge to mate still resides in these former-humans and so Half-Orcs exist most often as the progeny of rape.

Bugbears are created using a similar process but with Goblins as the starting point. Because Goblins are asexual, so too are Bugbears; there are no males, females or young, nor do they have any cultural history.